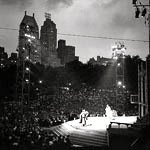 This summer, the Orchestral-Pop, Chamber-Folk, Americana-Roots music ensemble HEM, joined forces with the Public Theater of New York City to compose the score for an outdoor production of Twelfth Night! The annual Shakespeare in the Park production is one of NYC's most celebrated summertime offerings--made all the more appealing this year by the addition of HEM’s artistic virtuosity.

Not surprisingly, the rave reviews are already in. According to The Hollywood Reporter, “The musical interludes, in fact, are among the high points of the show, with the score composed by the indie folk-rock group HEM filled with hauntingly memorable songs.”

Newsday said, “This exceptionally musical production has beautiful folky-Elizabethan-Irish-Scottish-doo-wop songs by a group called HEM. Someone, please, ask HEM to write a show.”

The New York Times was no less effusive, “Music, as you may have gathered, is far from incidental to the production. The handsome score is written and performed by the “symphonic folk-rock” band HEM. In addition to the songs--most expertly led by the gifted comic actor David Pittu as a sour ragamuffin Feste--there is music to add color, wit, life to almost every scene, played on a mixture of strings, percussion and woodwinds, the sound evoking a distant era without straining for period authenticity.”

According to Variety, “Add in the soul-stirring music of neo-folk ensemble HEM and you have one magical night in Illyria.”

Soon, the music will be available to those of us who were unable to attend the performances. Preorders are now being taken at the HEM Music website.
Posted by gileskirk at 4:13:00 PM

Thanks for that information!

HEM's contribution to Twelfth Night is fantastic. The songs and music are very memorable and beautiful. Really looking forward to buying the CD; I loved Rabbit Songs