The legendary French stationer, Rhodia, has launched a diary/planner line for 2010. This means that those of us who have used (and loved) Moleskines for years are going to have to make a difficult choice: go with the tried and true or switch for the sake of finer paper stock, better bindings, and the more convenient A5 and A6 sizes.

Two brothers, Henri and Robert Verilhac, founded Rhodia, originally known as “Papeteries Verilhac Freres,” in Lyon, France in 1932. They came from a family of paper merchants, with two brothers from the previous generation having set up a family business selling paper in southern France and in French North Africa.

In 1934, the company moved from Lyon to Sechilienne near Grenoble in the French Alps. The name “Rhodia” reputedly comes from the Rhone, the river flowing by Lyon dividing the Alps from the Massif Central. Production of their famous line of notepads began that year. 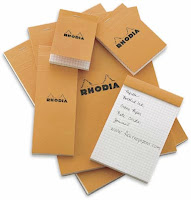 Their wide-ranging array of stationery products quickly became known as the finest commercially-produced writing pads and notebooks available anywhere—indeed, Rhodia paper is a very smooth acid-free stock that accepts ink without bleeding or smearing. Not surprising, the pads and notebooks soon became essential tools for artists and designers, writers and journalists, researchers and educators all over the world and gained what can only be described as a near-cult following.

The family-owned company was merged with Clairefontaine in 1997 and production transferred to Mulhouse, in Alsace, France. Nevertheless, members of the Verilhac family have continued to maintain control of both design and quality.

Thus, the conundrum posed by the new diary/planner line. 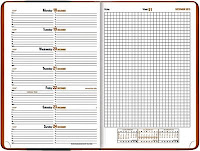 The new planners come in two sizes and two colors—each in a weekly notebook format using the traditional Rhodia graph paper for notes, instead of ruled lines and with the added benefits of address pages and tear-off corner page markers. Oh yes, and with no shortage of audacity, each also comes with an elastic closure. Still, it is the 90g Clairefontaine paper that is the real selling point.

Better have an answer Moleskine!
Posted by gileskirk at 6:07:00 PM

I must say that my family's allegiance falls to Rhodia. Designers sure do love some graph paper! And that orange cover, well...never has a Myers turned down a splash of color!

I believe I'll be switching to Rhodia in 2010. Moleskine's paper quality has not been consistent and it is fickle w/ fountain pen ink (except for Noodler's Black). I like Rhodia's paper much better. If I do not use Rhodia's diary/planner, I at least plan to use one of their journals for my "daily" journal.

My, oh my. I may have to make a switch. The last batch of Moleskines I have had have not been of good quality. The binding stitches are loosening and the paper is very inconsistent, even within the same book.

Anyone familiar with my favorite Field Notes Brand?

Not near as elegant, but practical and "manly."