The Father of Modern Spain 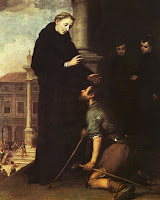 Thomas of Villanueva (1488-1535) grew up in the region of Don Quixote's La Mancha in a devout Christian home where virtuous living and gracious charity were constantly modeled for him by his parents. It was no surprise then when he committed himself to a life of Christian service after graduating from the new university at Alcala.

On this day in 1518, at the age of thirty, he was ordained and began a brilliant career as an anointed and effective preacher. His ministry was most distinguished not by his very evident pulpit skills however, but rather by his care and concern for the poor and needy. He was especially involved in providing relief for abused children and orphans--securing new homes for them as well as meeting their immediate material needs.

He was involved in other merciful activities as well--once, when he discovered an abortion cabal operating illicitly in a nearby city, he flew into a frenzy of righteous indignation. He used his influence to provoke a criminal investigation. He lobbied for stronger laws for the protection of children. And he worked with authorities to ensure local enforcement of the new laws.

At the time the Iberian peninsula contained no less than eleven separate kingdoms--besides Portugal--including Aragon, Castile, Leon, Catalonia, Valencia, Andalusia, Granada, Galicia, Asturias, Navarre, and Murcia. Relying on neither legalism or lawlessness, recidivism or revolution, he raised the standard of Biblical justice in these diverse lands--ultimately laying the ground work for a unified Spanish legal code once the various kingdoms were united under the Hapsburg descendents of Ferdinand and Isabella. In a very real sense then, he was the "Father of Modern Spain"--and that great nation was birthed out of a concern for the needy and helpless.
Posted by gileskirk at 6:08:00 AM