Better to Be Underestimated 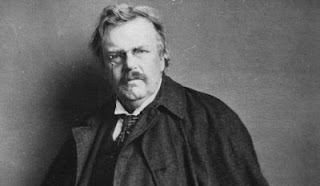 Known for his witty style, the amazingly prolific author G. K. Chesterton wrote in many genres, including fiction, biography, poetry, theology, history, as well as a myriad of essays. He was one of the most beloved writers in England during the first part of the 20th century.

On this day in 1912, biographer Hugh Lunn interviewed Chesterton for the Hearth and Home magazine.  He began with a description of the great man, “Everyone knows Mr Chesterton's appearance, a good portly man, i' faith, and a corpulence, like Falstaff. His writings, too, have become familiar, winning many disciples, especially among the young. At Oxford the Chestertonian and the Shavian are well-known types: the Shavian enthroned above human emotion is clever, but a prig; the Chestertonian, less brilliant, is more likeable. He doesn't care for advanced ideas, but he would like to combine wit and probity. So he welcomes a writer who defends old modes of thought with humor, and attacks modern thinkers on the ground that they are antiquated bores in disguise.”

Lunn was soon to discover that, with Chesterton, there was much more than met the eye—despite the fact that his rotund figure was sufficient to fill the eye.  With a glint of good humor, Chesterton began with characteristic words, “I am always ready to be interviewed, for I hold the theory, nowadays completely forgotten—as forgotten as this matchbox was still this moment (fishing a box out of a bowl on the mantelpiece)—the theory that the Press is a public agora. I should not refuse an interview even to a paper owned by one of those capitalist millionaires, whom I hate. Nowadays the Press merely echoes the powerful; its real aim should be to give the public a chance to state its views.”

Lunn could hardly get a word in edgewise, so the interview turned into something of a monolog—a forum for the great man to hold forth on all manner of ideas, much like his writing, “And now what do you want me to talk about? I am ready to give my opinion on any question, whether I know something about it or not. No, I'm not an Imperialist in the modern sense; the only theory of Imperialism that seems to me sound is Dante's. He defended the Roman Empire as the best human government, on the definite ground that the best human government would probably crucify God. Caesar had to be lawful; because Christ had to be killed by law.”

With that, he paused with a smile to ask Lunn what questions he really wanted to put upon the table. He should not have bothered, before he could reply, Chesterton was off again, “I do not believe in Cosmopolitanism, you know: nowadays it's either run by financiers for their own profit, or it's the product of Atheistic Socialism, as in Germany. Christ didn't come to bring peace among the nations. When He said that a man should turn the other cheek, I fancy He meant that a man, when attacked, should humiliate his enemy by treating him with sudden and unexpected contempt.”

And so it went for nigh on an hour.  Lunn had to admit afterward, “I had altogether underestimated the tornado of thought and creativity and imagination that the jolly figure of Chesterton contained.”  To which Chesterton later retorted, “It is always better to be underestimated than overestimated—that way, all good things are taken as if by surprise and are therefore all the more appreciated.”  Appreciated, Chesterton surely is.
Posted by gileskirk at 6:58:00 AM

Thank you for this information on Chesterton!