The 700th Anniversary of Bannockburn 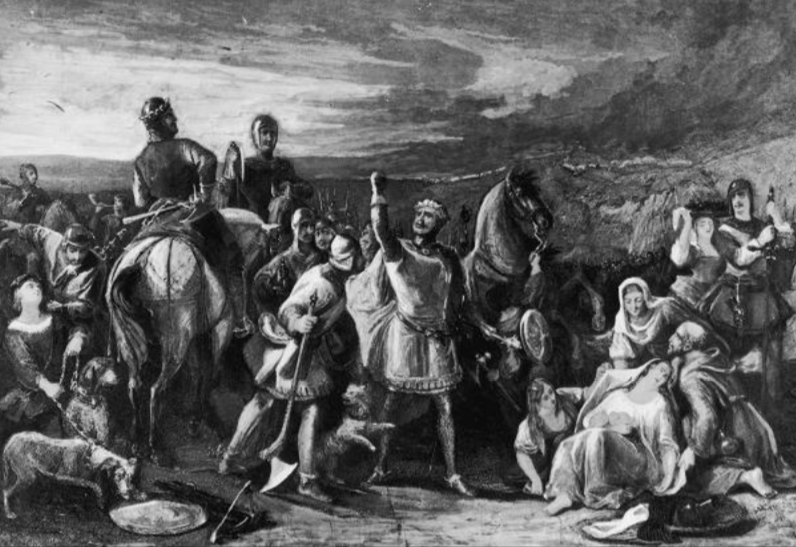 In an effort to relieve the besieged Stirling Castle, England’s King Edward II, the effeminate son of the cruel Longshanks, sent troops northward into Scotland—a land that had been in constant rebellion against his sovereignty for more than a decade. First there was William Wallace and his ragged corps of Highland warriors. Now there was the loyal army of the presumptive king of an independent Scottish nation, Robert the Bruce.

Though the great castle overlooking the wide plain of Bannockburn had thus far been able to resist Bruce’s assault, Edward knew it would not be able to hold out much longer. The taking of this fortress was an achievement of which Edward was prouder than of anything else he had done in his invasion of Scotland—in the royal annals, he made it of far greater moment than even his victory over Wallace at Falkirk.

The time and the place of the inevitable battle were thus fixed by an obdurate necessity, on this day in 1314; The English were bound to relieve Stirling Castle; The Scots must prevent them. If the invaders were not met and fought at Bannockburn, they might outflank the Scots and reach the castle. And if the Scots did meet and fight them there, it was not likely there would be any other favorable field for a pitched battle anywhere in the whole of the land. The battle, therefore, would of necessity, be under the walls of the castle. Nevertheless, the odds were against the Scots—they were outnumbered by at least three to one. They would have to rely on strategy—and Bruce had a brilliant strategy.

At daybreak they met the fierce charge of the English armies. A detachment of English archers quickly wheeled around the Scottish flank and took up a position where they could rake the compact clumps of Scots spear men. But the lines held just long enough for a host of decoys—actually just a group of camp-followers—to appear along the horizon of a neighboring hill. The women and children were mistaken for a fresh army of the Scots—just exactly what Bruce had hoped. The confused English lines began to scatter. Scottish pikemen were then able to confine the English to a small land mass between the Bannock Burn—the Gaelic name for river—and the Firth of Forth. With little room to maneuver effectively, the massive English regiments were forced into flight by a final charge of fewer than 2,000 Scots swarming down from Gillies Hill—on crest of which the William Wallace Memorial Tower stands today.

The end was rout, confused and hopeless. The pitted field added to the disasters; for though they were able to avoid it in their careful advance, many of the English were pressed into it in the retreat, and floundered among the pitfalls. Through all the history of its great wars before and since, never did England suffer a humiliation deep enough to approach even comparison with this. Besides the vast inferiority of the victorious army, Bannockburn was exceptional among battles by the utter helplessness of the defeated. There seemed to have been no rallying-point anywhere. It was as if the Scripture had been fulfilled, “The wicked flee when no man pursueth.”

Thanks for the reminder of this momentous event.

Thanks for the reminder of this momentous event.

And that victory allowed so many more of a spiritual nature.

That victory allowed so much more to come later. Church of Scotland, Covenanters i.e.... real RedNecks. No wonder I feel the kinship so strongly...lol

YET! they had a chance for freedom again, and took comfort over freedom. I was hoping they would vote YES in the last referendum and just be Scotland again.