The Five Solas of the Reformation 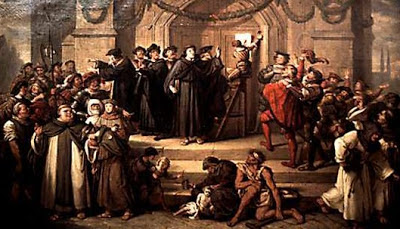 The "Five Solas of the Reformation" are Latin slogans used by Protestant Reformers to summarize and proclaim the essential theological distinctives of the Biblical Gospel:

495 years ago in the little college town of Wittenberg, in Saxony, Martin Luther’s theology had not yet been sufficiently burnished in the furnace of conflict and affliction to produce such a succinct list.  Indeed, in the span of a single month—between the end of September and the end of October in 1517—Luther detailed two prodigious lists, the lesser known "97 Theses Against Scholasticism" and the better known "95 Theses Against Indulgences."  Both Latin texts were posted on the College Chapel door for the purpose of discussion within the academic community—but both were quickly translated into vernacular German and transmitted far and wide by means of the new technology of moveable type printing presses.

The Reformation was launched by those lengthy and technical discurses, but was not until 1521, at the interrogation of Luther at the Diet of Worms, that the shorter, clearer, more definitive list of the “solas” began to take shape.  It was then that he declared his conscience to be altogether captive to the Word of God saying, "Unless I am overcome with testimonies from Scripture or with evident reasons—for I believe neither the Pope nor the Councils, since they have often erred and contradicted one another—my conscience is bound solely and completely by God's Word: Hier stehe ich; Here I stand; I can do no other. God help me. Amen!”

Thus was reclaimed the Scriptural teaching of the sovereignty of God over every aspect of the believer's life. As the Westminster Shorter Catechism asks, "What is the chief end of man? Man's chief end is to glorify God and to enjoy him forever."

This great and all consuming purpose called for all of life to be lived under the Lordship of Christ. Every activity of the Christian is to be sanctified unto the glory of God. Everything we have, everything we do everything we are is pledged to His greater Kingdom purposes.
As the Scripture says, "Whether, then, we eat or drink or whatever we do, do all to the glory of God; Whoever speaks, let him speak, as it were, the utterances of God; whoever serves, let him do so as by the strength which God supplies; so that in all things God may be glorified through Jesus Christ, to whom belongs the glory and dominion forever and ever. For from Him and through Him and to Him are all things. To Him be the glory forever. Amen." (1 Cor. 10:31; 1 Ptr 4:11; Rom. 11:36)
Posted by gileskirk at 2:20:00 PM