On this day in 1901, English author, journalist, artist, and wit G.K. Chesterton dashed out the first draft of a rather obscure short story that would ultimately define his work as a popular Christian philosopher. It was about a man who traveled around the world in an effort to find his true home—only to end up precisely where he began.

Thomas Smythe had been born, brought up, married, and made the father of a family in a little white farmhouse by a river. The river enclosed it on three sides like a castle—on the fourth side there were stables, and beyond that a kitchen garden, and beyond that an orchard, and beyond that a low wall, and beyond that a road, and beyond that a wood, and beyond that slopes meeting the sky—but Smythe had known nothing beyond what he could see from his house. Its walls were the world to him and its roof the sky. Indeed, in his latter years he hardly ever went outside his door. And as he grew lazy, he grew restless; angry with himself and everyone else. He found himself in some strange way weary of every moment and hungry for the next.

His heart had grown stale and bitter towards the wife and children whom he saw every day. His home had become drab and wearisome to him. Yet there was a fragment of a memory that yet remained of happier days when the thatch of his home burned with gold as though angels inhabited the place. Even so, he remembered it as one who remembers a dream. One calamitous day, his mind snapped under the weight of the contradiction—the contradiction between his fond remembrances of the past and his drab circumstances in the present. He presently announced that he was setting out to find his home—that fine white farmhouse by the river. Though his beloved wife and children tried to make him see that he was already there, he could not be persuaded. His delusion was complete.

Thomas Smythe then set out on an epic journey. He crossed hill and vale, mountain and plain, stream and ocean, meadow and desert. Like a transmigrating soul, he lived a series of existences but he never diverged from the line that girdled the world. At long last though, he crested a hill and suddenly felt as if he had crossed the border into elfland. With his head a belfry of new passions, assailed with confounding memories, he came at last to the end of the world. He had arrived at the little white farmhouse by the river—he had arrived at home. His heart leapt for joy as he saw his wife run to meet him in the lane. The prodigal had returned.

The story struck a chord with Chesterton’s readers for a thousand different reasons—it was a powerfully told parable of the universal human experience, it was a poignant prose poem of everyman’s heart longing, and it was a stern rebuke to the vagabond spirit that drags all the Cains, the Esaus, and the Lots eastward away from Eden. But they probably loved it most of all because it was their own story—the testimony of their own, as yet incomplete, pilgrimage home.
Posted by gileskirk at 6:15:00 AM 3 comments:

Tramp for the Lord 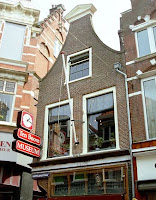 Corrie ten Boom, her sister Betsy, and her father were betrayed into the hands of the Nazis on this day in 1944. They had been attempting to aid and abet the escape of Jews from the holocaust. The story immortalized by the classic book and film, The Hiding Place, had now begun.

The story would ultimately end in death in the concentration camps for everyone except Corrie, who then became a "tramp" for the Lord, spreading the Gospel of forgiveness from sins to many nations.
Posted by gileskirk at 5:27:00 AM No comments:

Cyril, who with his brother Methodius was the pioneer missionary to the Slavs and architect of the Cyrilic alphabet, died while still serving in the realm of Moravia. He left behind him one of the greatest legacies any man has been graced to give the world. His influence, along with that of his brother, essentially reshaped the entire structure of Eastern European culture. So lasting was their impact that the two are called "the Apostles of the Slavs."

Around 860, Rastislav, a prince of the Moravian tribes, asked the Byzantine hierarchy to send missionaries to proclaim the Gospel among subjects. Patriarch Photius delegated the noble-born brothers Cyril and Methodius to the task. Natives of Thessalonica, they were no strangers to Eastern Europe and had already carried out diplomatic missions for Byzantium to the Abassid Caliph and later to the Alambahd Khazars.

Both men were learned and pious. Cyril was a professor of philosophy at the university in Constantinople. Methodius was a renowned linguist; it was said he was fluent in more than a dozen languages. Of Slavic origin themselves, the brothers were already familiar with the structure of the language and began developing a special alphabet to capture its sounds shortly after they arrived on the field. Their Glagolitic script was the basis for modern Cyrillic, which became the alphabet of learning and commerce throughout Central and Eastern Europe. Utilizing this script the brothers were able to translate the Scriptures, church liturgies, and other writings into the Slavic tongue.

The two brothers faced innumerable obstacles throughout their life, but their faith and forbearance enabled them to make a lasting impact that is felt even to this day across the wide expanse of a continent--from the Russian Steppe and the Caspian Ridge to Dalmatian Strand and the Balkan Upland.
Posted by gileskirk at 7:50:00 AM 1 comment:

Valentine was a third century pastor who was imprisoned for his faith. According to tradition, he wrote small pastoral notes to members of his congregation on leaves he was able to pluck from a maple tree just outside his cell. These little “Valentine’s cards” expressed his love for the flock, and his desire that they demonstrate like love toward one another. Gradually the tradition grew up for Christians to exchange notes of love and encouragement to one another on this, his birthday. Alas, the modern commercialization of the tradition has all but obscured this beautiful token of gracious fellowship.
Posted by gileskirk at 7:46:00 AM 1 comment:

He was the scion of a rich heritage that helped to shape American civilization in remarkable ways. His grandfather, Richard Mather, brought the family to the American colonies in 1635 after a distinguished career as a Puritan minister in England. There he became a vital member of the leadership of Boston—both through his articulate pulpit manner and through production of the Bay Psalm Book—the first book produced in America.

Richard’s son, Increase Mather, was likewise an influential pastor, educator, and author. He earned America's first Doctor of Divinity degree. He also served as president of Harvard and as a diplomat for the Massachusetts Bay Colony helping to renegotiate the colonial charter at the court of King Charles II following the restoration of the monarchy.

But the greatest of all the Mathers was Increase’s son, Cotton. Like his father and grandfather, he was an influential pastor, statesman, and author. Indeed, he ultimately proved to be the most prolific author in American history—nearly 450 of his works were printed in his lifetime, including books on an astonishing variety of subjects from theology and philosophy to natural science and history.

He left his mark in virtually every arena of human endeavor. So profound was his influence, in fact, that George Washington later called him the “Father of the Founding Fathers.”
Posted by gileskirk at 10:23:00 AM 1 comment:

When the first section of the Erie Canal opened in 1825, it was a marvel of engineering and human labor. Cut through the rolling hills and wide fertile valleys of upstate New York, it would become the superhighway of antebellum America. From Albany to Buffalo, it opened up the American frontier and made westward expansion inevitable. It turned New York Harbor into the nation’s number one port. It shaped social and economic development. With branches that eventually criss-crossed the entire state, cities and industries developed along the canal and flourished—including Rochester, Syracuse and Binghamton.

Until the American colonies declared independence in 1776, European settlement of the New World was largely confined to the eastern seaboard. The Appalachian Mountains were a formidable obstacle to westward movement. Only the Mohawk River Valley in New York offered both a land and a water passage through the mountains.

By 1817, plans for a man-made waterway fed by the Mohawk River and bypassing its waterfalls and rapids had been made. This plan was to traverse the entire state of New York, connecting the Hudson River in the east with the Great Lakes in the west. When it was opened, vast parcels of land became accessible for the first time. Shipping costs dropped dramatically. Immigrants to America, in search of new lands and new opportunities in the west, crowded canal boats. The westward movement of the nation was begun.

This great feat of American tenacity and ingenuity was immortalized in an old boatman’s folksong. The Erie Canal Song, also known as Low Bridge, was first published on this day 1913. It was composed in order to protest the coming of the mechanized barge which would replace the mule that had been used previously. Its refrain was familiar to generations of Americans afterward:

The song not only captured a slice of nostalgia, it epitomized the American pioneer grit and covenantal spirit.
Posted by gileskirk at 5:47:00 PM No comments: