In Spite of Himself

"And we were baptized and all anxiety for our past life vanished away." With these joyous words Augustine recorded his entrance into the church on this day in the 387 AD.

Born in North Africa in 354 of a Christian mother and pagan father, Augustine became, at twelve years of age a student at Carthage, and at sixteen, a teacher of grammar. His mother was determined to see him become a Christian and baptized. He was equally determined to have his pleasures. He took a mistress and she bore him a son, Adeodatus. At 29 his restless spirit drove him to Italy. In Rome he taught rhetoric for a year, but was cheated of his fees. He then moved to Milan where he came under the influence of Ambrose, bishop of the city.

In spite of himself he began to drift toward faith. At last, in a moment of crisis, he came to grace. Immediately he thrust aside those sins of the flesh which had held him bondage. At his mother's death, he returned to Africa where he founded a small scholastic community--and later became bishop of Hippo. Over the course of the last forty years of his life, he proved to be a subtle theologian who more than any other stamped his imprint upon Western culture.
Posted by gileskirk at 1:43:00 PM No comments:

Christ is risen! He is risen, indeed!

And Jesus Christ our Lord was shown to be the Son of God when God powerfully raised him from the dead by means of the Holy Spirit. Through Christ, God has given us the privilege and authority to tell Gentiles everywhere what God has done for them, so that they will believe and obey him, bringing glory to his name. Romans 1:4-5

Now if we died with Christ, we believe that we will also live with him. For we know that since Christ was raised from the dead, he cannot die again; death no longer has mastery over him. The death he died, he died to sin once for all; but the life he lives, he lives to God. In the same way, count yourselves dead to sin but alive to God in Christ Jesus. Romans 6:8-11

I want to know Christ and the power of his resurrection and the fellowship of sharing in his sufferings, becoming like him in his death, and so, somehow, to attain to the resurrection from the dead. Not that I have already obtained all this, or have already been made perfect, but I press on to take hold of that for which Christ Jesus took hold of me. Philippians 3:10-12

Praise be to the God and Father of our Lord Jesus Christ! In his great mercy he has given us new birth into a living hope through the resurrection of Jesus Christ from the dead. 1 Peter 1:3
Posted by gileskirk at 12:01:00 AM No comments:

View from the Shed Office 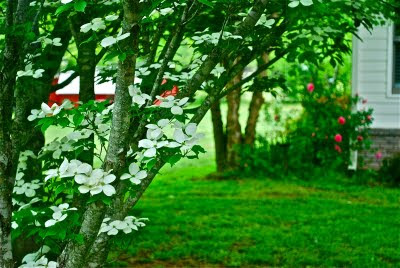 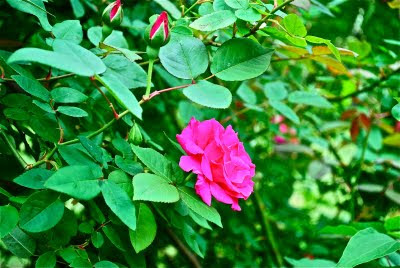 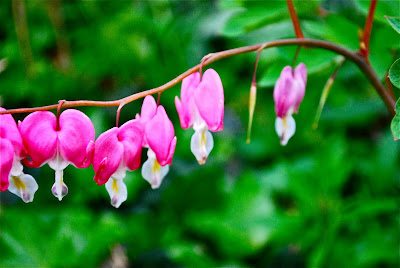 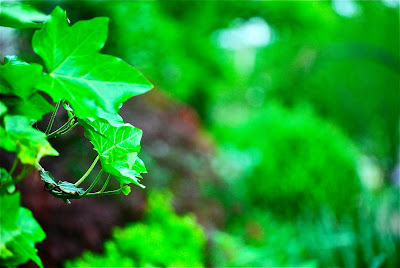 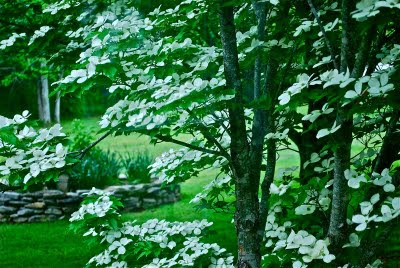 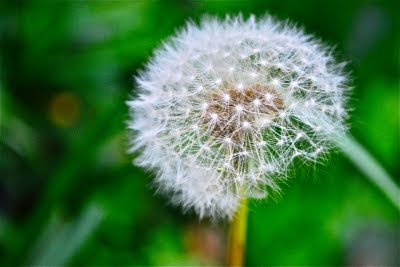 He Came for Us!

"No scene in sacred history ever gladdens the soul like the scene on Calvary. Nowhere does the soul find such consolation as on that very spot where misery reigned, where woe triumphed, where agony reached its climax." C. H. Spurgeon

"Christ has not only spoken to us by his life but has also spoken for us by his death." Soren Kierkegaard

“The marvel of heaven and earth, of time and eternity, is the atoning death of Jesus Christ. This is the mystery that brings more glory to God than all creation." C. H. Spurgeon
Posted by gileskirk at 8:31:00 AM 1 comment:

The palm tree and palm leaves appear again and again throughout the Bible as symbols of integrity, honor, righteousness, holiness, godly authority, and royal glory. The palm was used in the carved decorations of the temple, usually associated with the Cherubim, but also with the regal lion and the flower in full bloom. Indeed, the association of the palm with these ideas recurs more than three dozen times. The blessing of the Lord is often portrayed as “Like palm groves that stretch afar, like gardens beside a river, like aloes that the Lord has planted, like cedar trees beside the waters” (Numbers 24:6).

In addition though, throughout the entire ancient Near East the palm also had the common cultural connotation of refreshment and restoration. Waving palm tops along the horizon heralded the location of a desert oasis, a welcome stop for both camel and traveler. Palms provided weary travelers food and shade; the oasis, water. So palm branches become the symbol of welcome, public homage, and journey’s end. It was the sign of completion, fulfillment, and satisfaction.

For both the Romans and the Jews the palm was carried in joyful or triumphant processions. In 293 BC victorious Roman soldiers bore palm branches when parading in Rome; and the palm was given as a victory emblem at public games. Palm branches were the conventional symbol of public approval and welcome by all the eastern peoples to conquering heroes, and were strewn and carried in triumphal processions. The palm tree was embossed on ancient Hebrew coins. Later, the Romans celebrated the conquest of Judea by issuing new currency, retaining the palm tree, but with an added inscription celebrating their crushing victory.

All the Gospels report that people gave Jesus the kingly honor of strewing palm branches along the path during His triumphal entry. In the Synoptics (Matthew, Mark, and Luke) we are told that they also laid down their garments with cut palm rushes on the street; John more specifically mentions the full palm fronds. The joyous Hosannas that the people were singing (Psalm 118) were actually from the benediction song for the Passover meal, and thus foreshadowed passion Jesus would suffer during the week ahead. In addition, the whole scene was a fulfillment of all the Old Testament prophecies of the coming King (Zechariah 9:9-10).

Not surprisingly, as early as the late first century the palm was connected with martyrdom (Revelation 7:9) and was used to decorate grave markers and tombs in the Roman catacombs as a sign of the triumphant death of the martyr. On mosaics and on sarcophagi it usually stands for paradise, and Christ is frequently portrayed amid palms in heaven. So also in the earliest Christian art, the Lamb of God and the Apostles are depicted amid palms. In addition, the use of the palm became an almost universal worship convention on Palm Sunday by the end of the second or the beginning of the third century.

On this Sunday, Christians will once again observe this venerable and ancient practice during our worship services, as we again sing Hosannas to our King, waving these old Biblical symbols of royal pomp and joyous celebration.
Posted by gileskirk at 7:20:00 AM No comments:

Born in Northern Ireland to a wealthy Presbyterian family, Amy Carmichael (1867-1951) became one of the best known missionaries of the first half of the twentieth century. Her ministry took her first to Japan, then to Ceylon, and finally to the Dohnavur province of India.

Although the brutal Hindu traditions of sarti and immolation--burning widows alive on the funeral pyres of their deceased husbands--had been legally banned, to her horror she discovered that ritual abortion and female infanticide were still quite common. In addition, many of the young girls that she had come to work with were still being systematically sold off as slaves to the nearby pagan temples in order to be raised as cult prostitutes.

She immediately established a ministry to protect and shelter the girls. Although she had to suffer the persecution of various Hindu sects and the bureaucratic resistance of the British colonial government, Carmichael built an effective and dynamic ministry renowned for its courage and compassion. Sadly, many of her fellow missionaries in India--having partially accepted the presuppositions of Planned Parenthood’s Malthusian thought--believed that her effort to build an orphanage and school was actually a "worldly activity" that distracted her from the "saving of souls." To such accusations she simply replied, "Souls are more or less firmly attached to bodies."

Since her death in 1951, her Dohnavur Fellowship has continued to carry on ministries of evangelism, education, and medical aid among the poor and helpless. It remains one of the most dynamic Christian, pro-life, relief and development works on the Indian subcontinent.
Posted by gileskirk at 8:17:00 PM 3 comments:

Tippecanoe and Tyler, Too!

In 1840 the Whig Party took the gamble of nominating the oldest man ever to run for President, 68-year-old William H. Harrison (1773-1841), and they won the election but lost the gamble, for Harrison lived only one month after his inauguration. On March 4, 1841 he made a three hour inaugural speech in a drenching rain and caught pneumonia. One month later, on this day, he died in the White House.

He served the shortest term of any President, but his election ended the Jacksonian reign and brought the growing Whigs to power, even though John Tyler, the Vice-president who succeeded Harrison, was an ex-Democrat with rather watery Whig convictions.

The election of 1840 marked the beginning of elaborate national campaigns—by then the Whigs had become established as a second party, a development which helped to institutionalize the party system as the country’s method of selecting candidates. Smarting from their defeat in 1836, when they were new and poorly organized, the Whigs met almost a year before the election for their first national convention. They then proceeded to build an elaborate campaign around everything but the issues: Harrison’s military exploits against the Indians—especially the battle of Tippecanoe; and his service as a simple man of the West—the Ohio and Indiana Territories where he served as a civil and military leader.

Campaign posters pictured Harrison as “The Hero of Tippecanoe” or “The Farmer of North Bend,” hand to the plow in front of a log cabin. The catchy slogan “Tippecanoe and Tyler, Too!” rang out at the largest political rallies and mass meetings ever held in America. And it is one of the ironies of politics that the log cabin developed into a potent campaign symbol for Harrison, a man who was born in a white-pillared mansion into one of the aristocratic families of Tidewater Virginia. His father, Benjamin Harrison, was one of the Founding Fathers of the nation, a member of the Continental Congress and a signer of the Declaration of Independence.

And so it was that the man to hold the presidency for the shortest time may have made the biggest impact—if only from the standpoint of having invented the modern presidential campaign.
Posted by gileskirk at 7:32:00 AM 1 comment:

Since at least the seventeenth century this day has been celebrated with practical jokes and spurious news. Mark Twain commented in his Pudd’nhead Wilson’s Calendar, “This is the day upon which we are reminded of what we are on the other three hundred and sixty-four.”
Posted by gileskirk at 7:52:00 AM 1 comment: