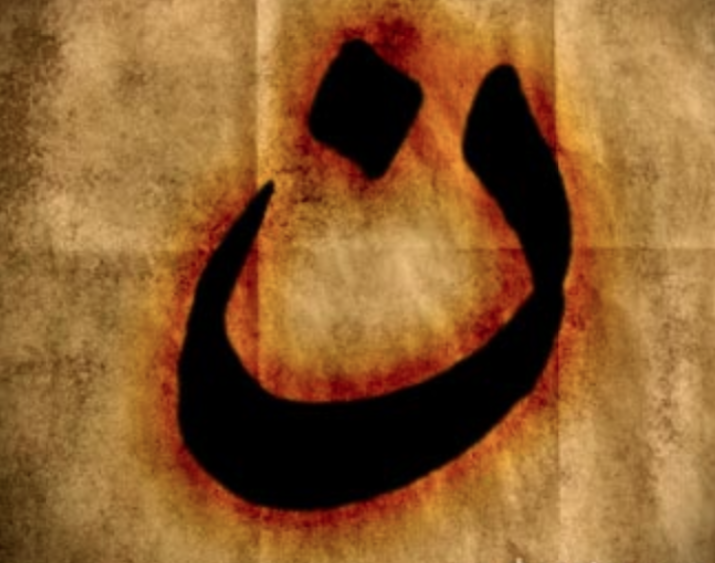 Nuun (ن) is the first letter of Arabic the word Nasara (نصارى or Nazarene). Since the beginning of the Islamic invasion of the Christian world in the 7th century this letter has been used by Muslims as a pejorative, a mark of shame, a scandalon  Today in Syria and Iraq, a new generation of invaders use it to stigmatize and persecute the few remaining Christians in the region. In the same way the Nazi's used the Star of David to identify Jews for persecution and eventually extermination, these Muslim terrorists use nun for their new Ji'hadi Holocaust.

Therefore, many Western Christians now display nuun as a mark of Gospel hope and a demonstration of solidarity with our persecuted brothers and sisters in the lands where the Church of Jesus Christ was born. We gladly bear the scandal of the cross.

And so, with this sign we joyously declare that together with the faithful all around the world, we belong to the Resurrected Nazarene, the Savior of the World, God Almighty, the King of kings, and the Lord of lords.  And one day, we know that "every knee shall bow and every tongue confess that Jesus Christ is Lord."
Posted by gileskirk at 9:18:00 AM No comments:

Every Stanza of the Star Spangled Banner 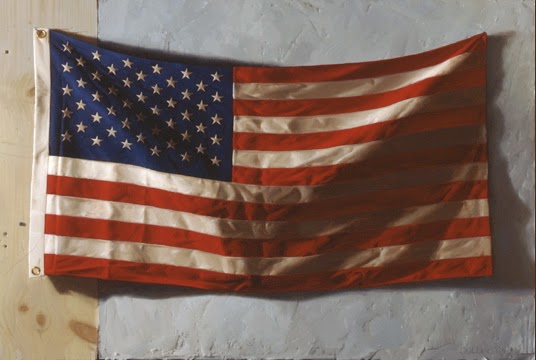 During the night of September 13, 1814, Francis Scott Key, a Washington attorney was sent to the British command to secure the release of a prisoner when the fleet began to bombard the placements of American fortifications in Baltimore at Fort McHenry. Though the battle raged through the night, the defenses stood firm. The sight of the flag still flying over the fort the next morning inspired the young lawyer to pen the immortal words of The Star Spangled Banner. Set to a popular English song, Anacreon in Heaven, it was officially declared to be the American national anthem more than a hundred years later, just before the First World War.

Though the first stanza is very familiar to us today, the rest of this great hymn is sadly neglected. This July 4, let's rectify that unwarranted slight:

O! say, can you see, by the dawn’s early light,
What so proudly we hailed at the twilight’s last gleaming:
Whose broad stripes and bright stars, through the perilous fight,
O’er the ramparts we watched were so gallantly streaming,
And the rocket’s red glare, the bombs bursting in air,
Gave proof through the night that our flag was still there:

O! say, does the star-spangled banner still wave
O’er the land of the free and the home of the brave?

On the shore, dimly seen through the mist of the deep,
Where the foe’s haughty host in dread silence reposes,
What is that which the breeze, o’er the towering steep,
As it fitfully blows, half conceals, half discloses?
Now it catches the gleam of the morning’s first beam—
In full glory reflected, now shines on the stream

‘Tis the star-spangled banner, O! long may it wave
O’er the land of the free and the home of the brave.

And where is the band who so vauntingly swore
That the havoc of war and the battle’s confusion
A home and a country would leave us no more?
Their blood has washed out their foul footsteps’ pollution.
No refuge could save the hireling and slave
From the terror of flight or the gloom of the grave!

And the star-spangled banner in triumph cloth wave
O’er the land of the free and the home of the brave.

O! thus be it ever when freemen shall stand
Between their loved homes and the foe’s desolation;
Bless’d with victory and peace, may our heaven‑rescued land
Praise the Power that hath made and preserved us a nation.
Then conquer we must, for our cause it is just—
And this be our motto—“In God is our trust!”

And the star-spangled banner in triumph shall wave
O’er the land of the free and the home of the brave.
Posted by gileskirk at 3:23:00 PM 1 comment: