The Canons of Dort 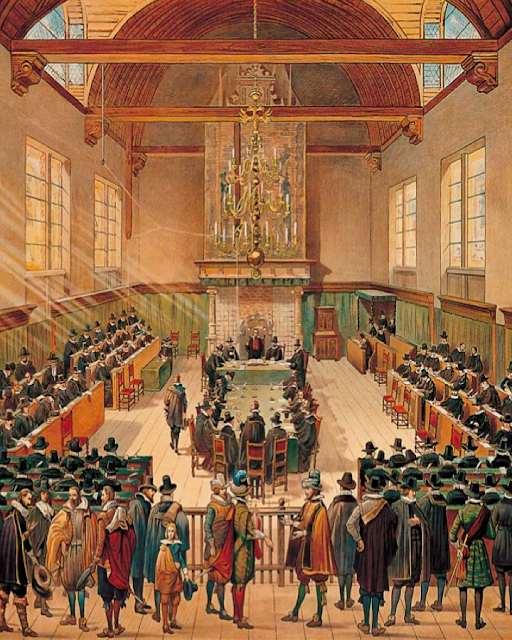 We didn’t get TULIP, the Five Points of Calvinism, from Calvin. Oh sure, the doctrines can be found in his magisterial Institutes of Christian Religion. But the idea that the great doctrines of the Reformation could be reduced to five essential points, T-total depravity, U-unconditional election, L-limited atonement, I-irresistible grace, and P-perseverance of the saints, comes to us from the Canons of Dort (sort of).

Actually, it is a bit of a complicated, convoluted story. In 1618 and 1619 a National Synod was held in the Dutch city of Dordrecht to sort out the theological controversies that had been raised by the teachings of the influential theologian Jakob Hermanszoon, best known by his Latinized name, Jacobus Arminius. Beginning in 1603, Arminius argued against several specific doctrines in the Belgic Confession. Though he had studied under Theodore Beza, during his years of ministry as a pastor in Amsterdam and as a professor at Leiden, he had gradually developed strong semi-Pelagian views of grace, God’s sovereignty, and free will, views that were clearly inconsistent with the Reformed tradition of Calvin and Beza.

Arminius died in 1609. Nevertheless, his followers continued to teach his views, calling themselves “Arminians.” And in 1610, they attempted to specify all their concerns with Calvinism, publishing a five point Remonstrance. They argued that man’s sinfulness is not so comprehensive that it deadens him to the convictions of faith; that divine decree of predestination is only conditional, not absolute; that the atonement is intended to be universal; that though the grace of God is a necessary catalyst to genuine faith, it does not act irresistibly in man; and that believers are always vulnerable to the danger of falling away from a state of grace. Essentially, they argued for the autonomous responsibility of man, pre-ordination through the foreknowledge of faith, and the universal sufficiency of Christ’s sacrifice. As you can imagine, such teachings created quite a stir in the Dutch church and beyond.

The Dordrecht National Synod was called to resolve the conflict. And the resolution came in a series of five responses, or canons. The canons were not intended to be a comprehensive explanation of Reformed dogmatics, but only an answer to those five disputed points of the Arminian Remonstrance. Nevertheless, the document that the Synod delegates drew up was so succinct, straightforward, and substantive, it quickly became a standard text for a clear exposition of the doctrines of grace. In short order, it was linked together with the Heidelberg Catechism and the Belgic Confession as the Three Forms of Unity.

What was intended to be a technical judicial response to a very specific case became a cornerstone for the building of the Reformed world and life view in the Netherlands and beyond.
Posted by gileskirk at 11:10:00 AM No comments: 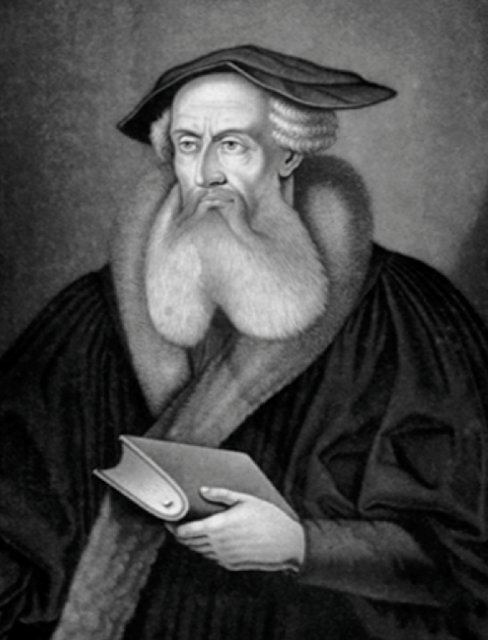 It was never the intention of Heinrich Bullinger that the Second Helvetic Confession be made public. The successor to Ulrich Zwingli in Zurich actually wrote it in 1562 as a private devotional exercise. Two years later, stricken during an outbreak of the plague, he revised the work in anticipation of his death. Although his wife and three daughters all succumbed to the dread epidemic, Bullinger survived.

It was a propitious moment in history. The Council of Trent had just concluded its deliberations in 1563. The definitive edition of Calvin’s Institutes of the Christian Religion was translated into German, French, Italian, and English later that same year. All Europe was abuzz with conflict, contention, and concern.

Frederick III, Elector of the Palatinate and sponsor of the Heidelberg Catechism, asked Bullinger to prepare a defense of the Reformed Faith in preparation for the upcoming Imperial Diet in Augsburg. Bullinger sent him a copy of the succinct testimony, recopied from his journal: 20,000 words arranged into 30 chapters, covering everything from systematic theology to practical piety. Frederick immediately recognized the work’s richness and had it translated from Latin into German. In short order, all the Protestant cities of Switzerland (the old Roman province of Helvetii or East Gaul) affirmed its value as well. After a few minor revisions in 1566, the testimony, now dubbed the Second Helvetic Confession, was affirmed by the churches in Zurich, Geneva, and Berne—and was received warmly by the Reformed communities in Scotland, the Netherlands, Poland, Northern Italy, and Hungary. Today, next to the Heidelberg Catechism, the Second Helvetic Confession is the most widely utilized document to come out of the magisterial Reformation.

Bullinger was a brilliant theologian, classical scholar, historian, and linguist. As the pastor of Zurich’s Grossmünster following the death of Zwingli, he was also renowned as a gifted expositor and preacher. But, because it was originally composed as private devotional exercise, the Confession is marked by a profound intimacy and a practical immediacy. Its sections on prayer, singing, Sabbath-keeping, care for the sick and poor, the role of civil government, and the character of marriage and the family, make it a compendium of everyday wisdom for the Christian life. But, it achieves this practical usefulness without ever compromising the profound depth of its theology and Biblical fidelity. Unapologetically grounded in Scripture, the Confession nevertheless makes a broad appeal to the whole of church history.

Thus, the Second Helvetic Confession reminds us that good theology need not be arcane, that deep Biblical truth is always immediately applicable to the ordinary details of life, and that the Gospel, like Christ Himself, is the same yesterday, today and forever.
Posted by gileskirk at 11:08:00 AM No comments: 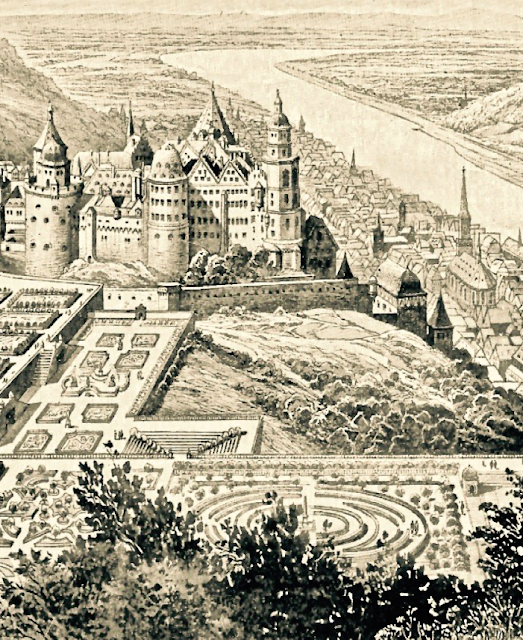 The Heidelberg Catechism, first published in 1563, has been used by Christians around the world ever since and with the Belgic Confession and Canons of Dort, remains one of the essential Three Forms of Unity. The Catechism summarizes the major teachings of the Scriptures in 129 memorable questions and answers. Very simple and yet quite profound, amazingly concise and yet fully sufficient, the Catechism has been appreciated by young and old alike as one of the most clear, helpful and comforting guides into all the spiritual treasures of the Gospel.

The word catechism comes from the Greek word katecheo, which means to teach. It is a word frequently used in the Bible. In his Gospel, for example, Luke explained that he had written, “an orderly account for you, most excellent Theophilus, so that you may know the certainty of the things you have been taught” (Lk 1:4). Wherever the word is used, it is translated as to teach or to instruct. So, a catechism is essentially a teaching tool, designed for oral instruction—thus, its question and answer format.

The 129 questions and answers are divided over 52 sections for each of the Lord’s Days in a year. Topically, the Catechism covers the themes of our sin (1-4), our deliverance (5-31), and our thankfulness for such a great salvation (32-52). At the same time, it surveys the truths of the Apostle’s Creed (8-22), the Ten Commandments (33-44), and the Lord’s Prayer (46-52). Under each Lord’s Day there are lists of Bible references to enable readers to identify which Bible passages the Catechism is summarizing in each answer.

The university town of Heidelberg had been, with Wittenberg and Strasburg, among the leading cities of the early Reformation. In April of 1518 Martin Luther travelled to Heidelberg for a debate at the annual meeting of the region’s Augustinian monks. There he presented 40 Heidelberg Theses, calling for a clear and sustained emphasis on the cross of Christ as the only means of salvation. Soon after, Wenzel Strauss, the pastor of the city church, Heiliggeistkirche, came to be known as “the evangelical trumpet.” Heinrich Stoll and Martin Bucer, likewise became champions of the doctrines of grace. The Gospel took root.

At the request of Elector Frederick III, the ruler of the Palatinate, the Catechism was composed by Zacharius Ursinus, 28 years old and professor of theology at the university, and Caspar Olevianus, who was just 26 and Frederick's court preacher. Their work was immediately influential. In The Netherlands the Catechism was popularized by Petrus Dathenus, who translated it into Dutch and Peter Gabriel who taught through all 52 sections for his congregation at Amsterdam each Lord’s Day afternoon. It quickly became a standard work of the ongoing Reformation—and remains so to this day.
Posted by gileskirk at 11:06:00 AM No comments: 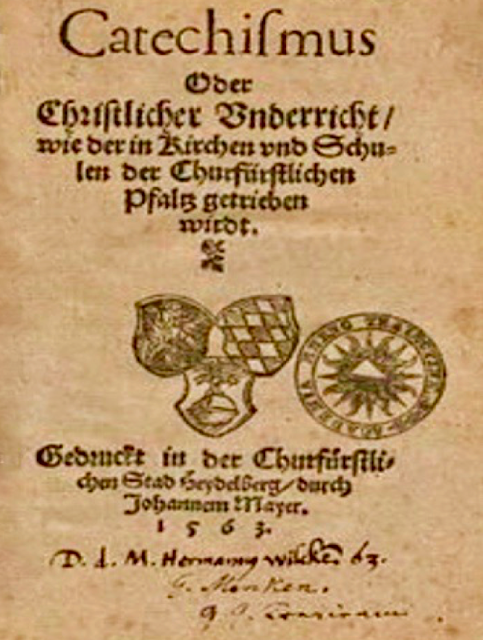 The Belgic Confession, published in 1561, was a clear, concise, and uncompromised declaration of Reformed faith. King Philip II had unleashed the full power of the Inquisition, determined to stamp out every remnant of Protestantism in Europe. Guido de Brès composed the work in French as an apology for the persecuted Reformation community suffering under his harsh rule. The Hapsburg Emperor was king of Spain, Sardinia, Sicily, Portugal, and Milan. Briefly during his marriage to Mary Tudor, he was also the titular king of England and Ireland. But even that failed to satisfy his voracious appetite.

Like his father Charles V, who confronted Martin Luther at the Diet of Worms, Philip was obsessive in his desire for unchallenged authority. Global hegemony was his aim. He rightly perceived that the Reformed faith and its adherents were obstinate obstacles in his grand pursuit.

In the Belgic Confession, de Brès carefully adhered to the Bible teaching he had learned from his mentors, John Calvin and Theodore Beza, taking a cue from their French Reformed Confession published two years earlier. Even so, de Brès pioneered the pattern for most of the confessions that would follow in the succeeding years: starting with the doctrine of God (Theology Proper), and then moving on to the doctrines of man (Anthropology), Christ (Christology), salvation (Soteriology), the church (Ecclesiology), and last things (Eschatology).

Translated into Dutch in 1562, the Belgic Confession became a rallying point for resistance to Hapsburg rule in the Lowlands. In 1567, de Brès was martyred for his faith. Yet, “he being dead, still speaks.” To this day, his confession remains one of the essential Three Forms of Unity.
Posted by gileskirk at 11:04:00 AM No comments: