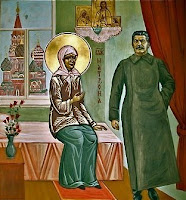 An icon depicting Soviet leader Joseph Stalin has been placed in a church of Leningrad district's city of Strelnya. According to an official spokesman from the Russian Orthodox Church, Evstafy Zhakov, legend has it that Stalin would often discourse with Blessed Matrona of Moscow--the scene depicted in the icon. Though the brutal dictator is believed to be responsible for the genocide of more than 20 million of his own people, Zhakov explained that he sees Stalin as "one of the nation's fathers, no matter how bad he was."
Posted by gileskirk at 7:35:00 AM

It is shocking to see how citizens of Russia still regard Stalin as hero. Street vendors and tourist shopts throughout the former Soviet Union hawk Stalin matrushka dolls and other Stalin junk. On my last visit to Moscow, a BBC poll revealed that half the population regarded Stalin as a great man!

Even in Ukraine, where Stalin's wrath was felt with a particular vengeance, much of the population remains in denial:

Wow, when you think you have seen everything something comes along that says no you have not

he relates a story of how ilya, metropolitan of the lebanon mountains, had locked himself in an underground cell and gone without food or sleep while he knelt in prayer for russia to the mother of God. he had a miraculous vision, which he described in a letter to the leaders of the orthodox church in russia. on the third day the mother of God had appeared to him in a pillar of fire and given him God's sentence: "the churches and monasteries must be reopened throughout the country. priests must be brought back from imprisonment, leningrad must not be surrendered, but the sacred icon of our lady of kazan should be carried around the city boundary, taken on to moscow, where a service should be held, and thence to stalingrad." in the face of hitler's steadily advancing forces stalin used this vision for his own advantage. a little before he proclaimed a "godless five-year plan," by the end of which (in 1943) the last church was to be closed and the last priest destroyed. but now the boss decided to act on ilya's vision. 20,000 churches were opened and the wonder working icon of our lady of kazan was brought into the streets and carried through leningrad, moscow & stalingrad.

it was all a ploy to get the people to see the germans as the enemy instead of liberators. stalin was a russian & a man of the people. but most of all, stalin was a shrewd politician. the people rallied behind him and defeated the germans. only after that did he close the churches and kill the priests.

"Stalin was a Russian" ? Born and raised in Georgia, taught as a revolutionary and as a Marxist. Destroyed the Cathedral of Christ the Savior, helped unleash a famine in Southern Russia, Northern Kazakhstan, and Ukraine - where most of the peasants were descendants of 18th-19th century Russian serfs. So I would not say he was a "Russian".

Stalin is popular because winners are popular: Chingis Khan in Mongolia, Timur in Uzbekistan, Mehmet II in Turkey: they were strong, conquerors, and took from others. And yet they are praised and celebrated as national heroes, as are the early Caliphs in Islam and I am sure you can find other instances in France, Britain, USA, etc.

This is why Gorbachev is not admired in Russia: success rules.
Read Machiavelli.

Stalin presided over industrialization, making USSR strong, vitory over Germany, expansion of borders, and he later stood up to the American empire.
All pluses.

What is he doing in an Icon, though, I have NO IDEA.