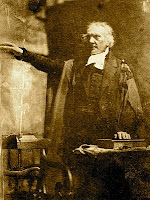 Chalmers didn’t just preach such notions to others—he faithfully proclaimed the Gospel of grace and holiness to his own heart. As his daughter later testified, “His ambition was to know Christ, and this one aim simplified his life. His obedience in the smallest details was very striking. It was not so much that he did not do wrong, but he seemed always to do the things that pleased God. Those who lived with him can hardly recall a single unworthy action in his life of which he was not quick to repent. Step by step he walked with God, doing everything as in his sight. ‘You are not very holy if you are not very kind,’ he used to say, and this spirit of love characterized his actions.”

Chalmers not only attempted to live a righteous life marked by genuine sanctification, his message was marked by an uncompromising call to holiness. His books and sermons were filled with the theme—his Commentary on Romans was concerned with little else; his compilation of Sabbath Readings aimed at accenting matters of sanctification; and his preaching would admit little else.

How different is the temperament of the modern church and her churchmen. The erosion of the distinctiveness of the Gospel and the subversion of the idea of holiness has wrought an avalanche of decadence. The moral practices of the average Christian today are not discernibly different from the average non-Christian. It doesn’t take a rocket scientist or a social ethicist to figure out: that does not bode well for the church. What we do or don’t do, how we act or don’t act, what we want or don’t want, are all likely to be practically identical to what our unbelieving neighbors do, act, or want.

Perhaps that is why the experience of Chalmers seems so remote to us; to our modern ears, the painful self-examination of his Letters seems overwrought; his fierce denunciations of sins we hardly notice seems wildly exaggerated in light of his disciplined attention to holiness, “I lament the sins of coldness and earthliness; wandering in prayer; seeking to benefit others without being benefited myself; something of discontent at little annoyances; chagrin and envy; opportunities lost; sick persons ill-advised; my class of young people too little taught of Christ; and in all my preaching very inadequate setting forth of Christ and the Spirit.”

Oh, that we might regain even a modicum of his passion for this, the “ordinary Christian life.”
Posted by gileskirk at 1:12:00 PM

Amen. Chalmers has been both a great encouragement and a source of antagonism to me since 'discovering' him a few years ago. What began as an inquisition into his thoughts on pastoral ministry often turned into an interrogation of the soul. His focus is so very singular. This is so counter to our age. Counter, but needed. I only pray that I may mirror just a bit of his 'ordinary Christian life.'

Fasting and scripture memory have been invaluable in my own pilgrimage. These two disciplines along with prayer seem to help me when the times get rough...which is most of the time!

Fasting and scripture memory have been invaluable in my own pilgrimage. These two disciplines along with prayer seem to help me when the times get rough...which is most of the time!

In reading this morning from Alexander Whyte's BIBLE CHARACTERS, I found the same kind of piety and call for holiness. Whyte's time was 1836-1921. So the Scottish Christian zeal continued on for a time after Chalmers.
What do you know of Whyte?