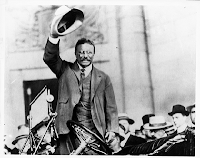 At a campaign stop in Milwaukee on this day in 1912, a deranged, out-of-work bartender emerged from a crowd and shot Theodore Roosevelt in the chest at point-blank range. Staggered by the impact of the bullet and the shock of the injury, the great man nevertheless righted himself. As the crowd converged on the man, the wounded former president cried, “Stand back! Don’t hurt the man! Bring him to me!” After examining his would-be assassin with a dismissive glare, he told his aides to get him to the rally. “This may be the last speech I deliver,” he admitted.

Seeing that he was bleeding heavily, several doctors in Roosevelt’s party wanted to rush him to the hospital at once, but he waved them aside. “You just stay where you are,” he ordered. “I am going to make this speech and you might as well compose yourselves.” When they persisted, he said, “Get an ambulance or a carriage or anything you like at ten o’clock and I’ll go to the hospital, but I won’t go until I’ve finished my speech.” He then demanded that his driver proceed to the auditorium.

The crowd was told what had happened. But as Roosevelt appeared on the platform, the familiar figure smiled and waved weakly to the awestruck crowd. “It is true,” he whispered in a hoarse voice, “I have just been shot. But it takes more than that to kill a Bull Moose.” Now beginning to gain his composure, he said, “Friends, I should ask you to be as quiet as possible. And please excuse me from making a long speech. I’ll do the best I can.”

He then took his manuscript from his jacket; it had been pierced through by the bullet and was soaked with blood. “It is nothing,” he said as the people gasped. “I am not hurt badly. I have a message to deliver and will deliver it as long as there is life in my body.” The audience became deathly still as he went on to say, “I have had an A-1 time in life and I am having it now.”

He always had the ability to cast an intoxicating spell over crowds. Even now, his physical presence was dominating. Though he was bleeding profusely, he went on to speak for an hour and a half. By the end he had almost completely regained his typical stump fervor—rousing the crowd to several extended ovations. When at last he allowed his concerned party to take him to the hospital, the audience reached a near frenzy chanting “Teddy! Teddy! Teddy!”

At the hospital he joked and talked politics with his attendants. But his condition was hardly a joking matter. The surgeons found that the bullet had fractured his fourth rib and lodged close to his right lung. “It is largely due to the fact that he is a physical marvel that he was not mortally wounded,” observed one of them later. “He is one of the most powerful men I have ever seen on an operating table.”

Nevertheless, he was no longer a young buck at the age of fifty-four. He was required—against his quite considerable will—to sit out the remainder of the campaign. Later, his biographers would view the incident as quintessential Roosevelt: imposing the sheer force of his will upon a seemingly impossible circumstance, and yet prevailing.
Posted by gileskirk at 7:56:00 AM

Oh, for a man of that calibre to be in the White House today. I know not everyone agrees with Roosevelt's policy course, but his character was above repute. I have always been awed by this incident in his life. His internal resolution to complete what he set out to accomplish is absolutely stunning. I only hope that my own fibre is of the same stuff.