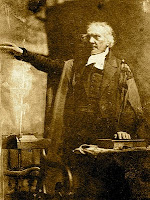 The great Scottish pastor, social reformer, educator, author, and scientist Thomas Chalmers (1780-1847) was born on St. Patrick's Day 1780 at Anstruther on the Fife coast. During the course of his long and storied career he served as the pastor of three congregations, taught in three colleges, published more than thirty-five best-selling books, and helped to establish more than a hundred charitable relief and missions organizations. He practically reinvented the Scottish parish system as well as the national social welfare structure. He counted such luminaries as the Duke of Wellington, Sir Walter Scott, King William IV, Thomas Carlyle, William Wilberforce, and Robert Peel as his friends. Indeed, he was among the most influential and highly regarded men of his day.

In 1809, having already made his mark as a brilliant professor of mathematics at St. Andrews and serving a small rural parish, he underwent a spiritual transformation following an extended illness. Afterward, he completely abandoned himself to his little covenantal community. He married and had his first children there. He established a classical school at the heart of the parish. He set about a reform of the ministry to the poor, the widows, and the orphans. He established a pioneer missionary society and a Bible society. In addition, Chalmers began his prodigious and prolific publishing career.

Chalmers went to Glasgow at the invitation of the Magistrates and Town Council in 1815. He served first in the Tron Church until 1819, and then, he was transferred to the newly-created parish of St John’s, a poorer parish with a very high proportion of factory a workers, where he had the freedom to develop ministry to the poor and needy.

From the beginning of his ministry in the city his preaching was fully appreciated, and many attended from throughout Glasgow, but Chalmers was concerned that his ministry should first and foremost be to the parish—where some eleven or twelve-thousand people lived and worked. He commenced a program of visitation from house to house which took two years to complete. He organized the eldership to cooperate in this task and developed Sabbath evening schools. He undertook care of the poor, education of the entire community, and reform of the local political economy. In addition, he became a popular author, at times even besting his friend Walter Scott in sales.

In later years, he prepared others for a similar impact in ministry at the University of Edinburgh—always modeling mercy himself. In 1843, he led the Evangelicals in the establishment of the Free Church. And in 1846 laid the cornerstone for its New College.

Thomas Carlyle said of him “What a wonderful old man Chalmers is. Or rather, he has all the buoyancy of youth. When so many of us are wringing our hands in hopeless despair over the vileness and wretchedness of the large towns, there goes the old man, shovel in hand, down into the dirtiest puddles, cleans them out, and fills the sewers with living waters. It is a beautiful sight.” By the end of his life, Chalmers had changed his land like no other since Knox.
Posted by gileskirk at 6:08:00 AM

I shall raise my glass for two Saints forever on this day...Cheers!