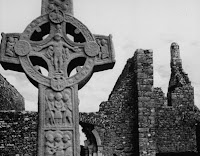 Christians have celebrated All-Hallows-Eve or Hallowmas since about the 8th century as a night of prayerful preparation before All Saints Day.  But, the pagan associations of Halloween with the day are actually much older—and perhaps more deeply entrenched.
Many of the ancient peoples of Europe marked the end of the harvest season and the beginning of winter by celebrating a holiday in late autumn. The most important of these holidays to influence later customs was Samhain, observed by the ancient Celts. Samhain marked the end of one year and the beginning of the next.  According to their tradition, the spirits of those who had died in the preceding year roamed the earth on Samhain evening. The Celts sought to ward off these spirits with offerings of food and drink. They also built bonfires at sacred hilltop sites and performed rituals, often involving human and animal sacrifices, to honor Druid deities.

When the Celts were eventually absorbed into the Roman empire, many of their traditions were adapted by the conquerors as a part of their own celebrations. In Britain, Romans blended local Samhain customs with their own pagan harvest festival honoring Pomona, goddess of fruit trees—from which the game of bobbing for apples was derived. In many places such as Scotland and Ireland, Samhain was abandoned only when the local people converted to Christianity during early Medievalism. But even then, pagan folk observances were linked to a number of Christian holidays.

Thus, many of the old Samhain traditions thought to be incompatible with Christianity often became linked with Christian folk beliefs about evil spirits in the celebration of Halloween. Although such superstitions varied a great deal from place to place, many of the supernatural beings now associated with the holiday became fixed in the popular imagination during the Renaissance. In British folklore, small magical beings known as fairies became associated with Halloween mischief. The jack-o’-lantern, originally carved from a large turnip rather than a pumpkin, originated in Medieval Scotland.

As belief in many of the old superstitions waned during the late 19th century, Halloween was increasingly regarded as a children’s holiday. Beginning in the 20th century, Halloween mischief gradually transformed into the modern ritual of trick-or-treating. Eventually, Halloween treats were plentiful while tricks became rare.

Alas, the idea of the day being a prayerful preparation for All Saints Day is even more rare.