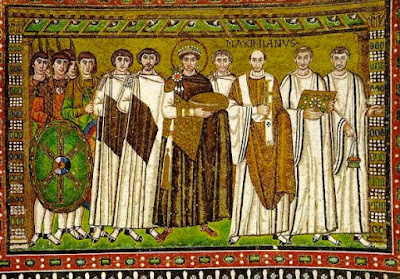 The first Ecumenical Council was convened in the Byzantine city of Nicea on this day in 325 by the recently converted Roman emperor, Constantine.  It was a momentous occasion—the first time the church had convened a universal synodical meeting since the time of Peter, James, John, Barnabas, and Paul at Jerusalem to discuss the initial outreach of the largely Jewish church to the Gentiles.

Three hundred and twelve bishops gathered.  In the center of the room, on a throne, lay the four gospels.  The emperor himself, dressed in a purple gown and with a silver diadem, opened the council saying, "I rejoice to see you here, yet I should be more pleased to see unity and affection among you."  The next few days would be devoted to achieve that purpose, if at all possible, by finding an agreeable way to describe precisely who Jesus was.

The problem was that a prominent Eastern bishop, Arius had been preaching that Christ was actually a creation of God—the first of all his creatures, of course, but a creation nonetheless.  He was not of the substance or nature of God.  "There was a time when the Son was not," he and his followers insisted.  They even made up Unitarian songs, slogans, and jingles with catchy tunes to propagandize their ideas among the masses.

Bishop Alexander of Alexandria was horrified.  Jesus, the Word, had co-existed eternally with God the Father he argued.  If Christ were not God, then man could not be saved, for only the infinite and holy God could forgive sin.  He deposed Arius.  Arius did not go quietly.  He gathered followers and continued to teach his pernicious doctrine.  The factions rioted.  The unity of the empire was shaken.  Constantine was alarmed.  And that was why he called the council in the first place.

As the council progressed, the bishop of Nicomedia defended Arius' views, attempting to prove logically that Jesus, the Son of God, was a created being.  Opposition bishops snatched his speech from his hand and flung it in shreds to the floor.  They had suffered for Christ, some of them greatly, in the persecutions of Diocletian.  They weren't about to stand by and hear their Lord blasphemed.  Otherwise, to what purpose had they borne their gouged eyes, scourged backs, hamstrung legs and scorched hands?

The issues of Nicea boiled down to this.  If Christ is not God, how can He overcome the infinite gap between God and man?  If a created being could do it, there were angels aplenty with the power.  Indeed, why could not any good man himself bridge the gap?  On the other hand, Jesus had to be truly man, otherwise how could He represent mankind?

The orthodox bishops ultimately prevailed.  Arius was condemned.  At that point the council decided to write a creed that clarified the Bible’s teaching on the nature of Christ’s person and incarnation.  The Nicene Creed became a document of fundamental importance to the church and gave clarity to the issues of orthodoxy and heterodoxy.
Posted by gileskirk at 7:38:00 AM

Do you recommend Peter J. Leithart on Constantine?

I read everything Peter writes--and sometimes, that's quite a feat since he writes so much. Even when I don't entirely agree with him, I find him to be brilliant, provocative, insightful, and winsome. I greatly enjoyed the Constantine book--and while his scholarship on the subject far out-distances mine, his thesis is one that I've held to for many years.