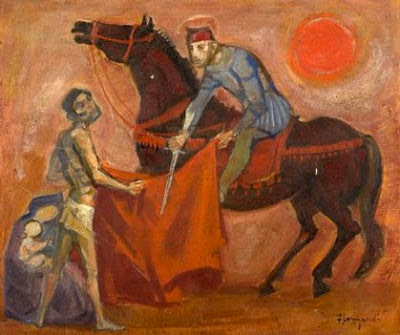 Martin of Tours was a pastor who was martyred for his faith on this day in 397.  Also on this day in 655, Martin of Umbria was martyred during the great Monothelite controversy.  Both men demonstrated perseverance in the face of political persecution, personal humiliation, torture, starvation, and eventually, death, made them models of faith during the early medieval period.

According to legend, Martin of Tours once cut his own coat in half to share it with a beggar.  Part of the cloak was saved and considered a holy relic in France, with monarchs going so far as to carry it into battle.  The cloak was kept in a “chapelle,” from the French word “chape,” meaning “cape,” and its overseer was the "chapelain", from which, of course, we get our words "chapel" and "chaplain".

During his final imprisonment, Martin of Umbria diligently kept the fasts of the Little Pascha, as Advent was then called, though he was already dying of hunger.  Traditionally, Christians have recalled the faithfulness of both of these heroes of the faith on November 11 by enjoying the last great feast of the season—in England a sumptuous dinner of beef is consumed while in Germany a grand banquet featuring roast goose is served.  The new wine is uncasked.  Good children receive gifts of fruit and nuts—while naughty children receive stones and ashes.
Posted by gileskirk at 5:41:00 PM

Who is the artist?

The artist is Trento Longaretti. The work is a small oil on canvass, painted in 1975, entitled "St. Martino e il Povero." It is in the Paolo VI Sull'arte Moderna e Contemporanea in Brescia, in the shadow of the Italian Alps in Lombardy.