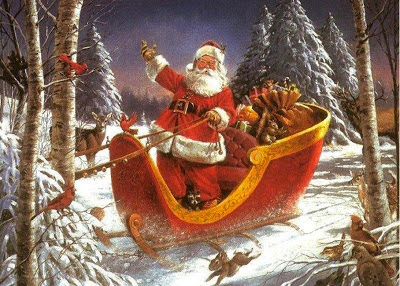 The fourth century pastor who inspired the tradition of Santa Claus, may not have lived at the North Pole or traveled by reindeer and sleigh but he certainly was a paradigm of graciousness, generosity, and Christian charity. Nicholas of Myra’s great love and concern for children drew him into a crusade that ultimately resulted in protective Imperial statutes that remained in place in Byzantium for more than a thousand years.
Though little is known of his childhood, he was probably born to wealthy parents at Patara in Lycia, a Roman province of Asia Minor.  As a young man noted for his piety, judiciousness, and charity, he was chosen bishop of the then rundown diocese of Myra.  There he became gained renown for his personal holiness, evangelistic zeal, and pastoral compassion.

Early Byzantine histories reported that he suffered imprisonment and made a famous profession of faith during the persecution of Diocletian.  He was also reputedly present at the Council of Nicaea, where he forthrightly condemned there heresy of Arianism—one story holds that he actually slapped the heretic Arius.  But it was his love for and care of children that gained him his greatest renown.  Though much of what we know about his charitable work on behalf of the poor, the despised, and the rejected has been distorted by legend and lore over the centuries, it is evident that he was a particular champion of the downtrodden, bestowing upon them gifts as tokens of the grace and mercy of the Gospel.

One legend tells of how citizen of Patara lost his fortune, and because he could not raise dowries for his three young daughters, he was going to give them over to prostitution.  After hearing this, Nicholas took a small bag of gold and threw it through the window of the man’s house on the eve of the feast of Christ’s Nativity.  The eldest girl was married with it as her dowry.  He performed the same gracious service for each of the other girls on each of the succeeding nights.  The three purses, portrayed in art with the saint, were thought to be the origin of the pawnbroker’s symbol of three gold balls.  But they were also the inspiration for Christians to begin the habit of gift giving during each of the twelve days of Christmas—from December 25 until Epiphany on January 6.

In yet another legend, Nicholas saved several youngsters from certain death when he pulled them from a deep vat of vinegar brine—again, on the feast of the Nativity.  Ever afterward, Christians remembered the day by giving one another the gift of large crisp pickles.

The popular cultural representation of St. Nicholas as Father Christmas or Santa Claus, though drawing on a number of such legends, was based primarily on a the Dutch custom of giving children presents—slipping fruits, nuts, and little toys into shoes or stockings drying along the warm hearthside—on his feast day, December 6.  Throughout the rest of Europe during the middle ages, that day was marked by festively decorating homes and by a sumptuous feast that interrupted the general fasting of Advent.  And in Scandanavia it was celebrated as a day of visitation, when the elders of all the remote country churches would bundle themselves in their thick furs and drive their sleighs laden with gift pastries through the snowy landscape to every home within the parish.

The transformation of St. Nicholas into Santa Claus is rooted in a number of intertwined traditions, legends, and archetypes.  But perhaps more than any other sources, the advertising of soft drink manufacturer Coca Cola and the holiday cartoons of New York newspaperman Thomas Nash have profoundly shaped our perception.  Coca Cola’s serving trays, signage, and print ads popularized the Nash caricature of a rotund, jolly, fur-draped, gift-laden, and unbidden visitor who pops down chimneys and distributes gifts to children all over the world.

Alas, thus stripped of his pastoral function and parish proximity, Santa has become almost fairy-like in his mythic proportions.