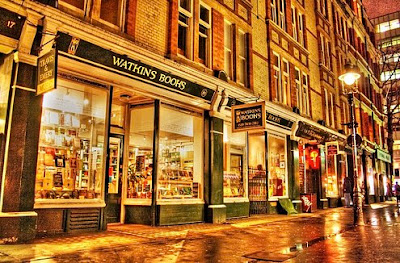 Watkins’ Bookshop in Cecil Court, just off Charing Cross between Leicester Square and Covent Garden in London, was established in 1891 by John Watkins, and is still London’s premier occult bookstore. One of its most famous customers was Carl Gustav Jung, who would together with Sigmund Freud, pioneer the field of psychology and psychotherapy. Watkins became Jung’s publisher, producing the1925 edition of Jung’s Seven Sermons to the Dead.

For a prominent scientist to choose an occult bookstore as the publisher of his book might seem odd, at first glance. But Jung had “received” this work via automatic writing. Jung believed he had a “spirit guide,” named “Philemon.” Jung observed that, “Philemon and other figures of my fantasies brought home to me the crucial insight that there are things in the psyche which I do not produce, but which produce themselves and have their own life. Philemon was a force in me that was not myself. I held conversations with him, and he said things which I had not consciously thought. Psychologically, Philemon offered me superior insight.”

To many scientists perhaps, Philemon might have been considered a figment of Jung’s imagination, or even evidence of his madness. But Jung felt that Philemon was real--even though he was "dead," he somehow was able to communicate.

Jung was convinced he was not insane; he felt that Philemon was a valuable source of insight for him—indeed, he believed that his contact with Philemon opened the way for his new theory of the "collective unconscious," a kind of eternal data storehouse or spiritual wiki-library that contained all the knowledge, all the truth, and all the archetypes, or “active principles” in the cosmos.  Jung believed, that with the help of Philemon, he had tapped into a means of interaction between the “dimension of the dead,” the “world of dreams,” the “realm of the unconscious,” and ours.

The whole episode is a good reminder to us, as historian Paul Johnson so pointedly demonstrated in his book, Intellectuals, that many of the iconic pioneers of modern "science" were in fact, deeply troubled spiritually and psychologically.

It is also a sober reminder to us that what is often sold to us by pop-psychology methodologists as innocently wholistic and integrative health practices—such as “dream-catching” or “dream-work” or “yoga-fainting”—may well have far more nefarious roots than we might imagine.
Posted by gileskirk at 9:44:00 AM

"The Aryan Christ" -- excellent biography of Jung -- mentions his practice of polygamy as a mystical discipline. The author concludes taht the main elements of Jung's "scientific" work came from a short shelf of books on Teutonic folklore.

It's refreshing to get a perspective that is unrecognized at my college. This is a frightening piece of information. Why is this highly important part of this man's life dismissed and his hypotheses and theories trusted by psychologists nation-wide (if not world-wide)? Lord help this generation.
-Autumn Lipford