The Words that Toppled the Wall 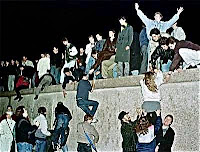 On June 12, 1987, President Ronald Reagan issued a now famous challenge to Soviet totalitarianism at the Brandenburg Gate in the divided city of Berlin. Standing with two panes of bulletproof glass behind him--to protect him from East German snipers--and in front of a crowd of 45,000 West Berliners. Glancing across the wall that had been a symbol of Communist oppression, he said:

"Like many Presidents before me, I come here today because wherever I go, whatever I do: Ich hab noch einen Koffer in Berlin--I still have a suitcase in Berlin."

Then, interrupted by the cheers of the crowd some 28 times, his trademark folksy oratory quickly rose to a great rhetorical crescendo:

“We welcome change and openness; for we believe that freedom and security go together, that the advance of human liberty can only strengthen the cause of world peace. There is one sign the Soviets can make that would be unmistakable, that would advance dramatically the cause of freedom and peace. General Secretary Gorbachev, if you seek peace, if you seek prosperity for the Soviet Union and eastern Europe, if you seek liberalization, come here to this gate. Mr. Gorbachev, open this gate. Mr. Gorbachev, tear down this wall!"

Mr. Gorbachev never did. But, with history rapidly passing him by, he stood helplessly just over two years later as the captive people of East Berlin did--twenty years ago this week.
Posted by gileskirk at 9:54:00 AM

If ever I had to present a positive case for research on cloning, my case would consist of saying, "Ronald Reagan." Boy, how we need him right now.
Thank God for raising him up. He did not ask Gorbachev to tear down the wall: he commanded him to.
Gorbachev was a product of the Communist system that produced Stalin and Khrushchev. He was, however, a useful pawn in the hands of a Sovereign God.