Nothing by Mere Authority 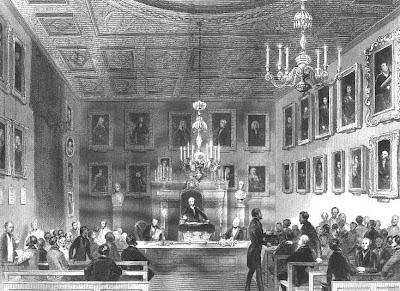 When the Royal Society was chartered by Charles II on this day in 1662, it was the first scientific society in history. Interestingly, devout Christians, with their interest in God's creation, were most responsible in bringing it into existence. In fact, its membership was overwhelmingly Puritan in makeup.

The Society originally grew out of the meetings of the so-called "invisibles" who gathered at the home of Katherine Boyles. Earlier she had supported the Parliamentarians and Puritans in the revolt against Charles I. Of deep intelligence, she welcomed the group into her house so that she might share the new scientific findings.

The other stalwarts of the Society were likewise quite conservative in their theological inclinations.  Theodore Haak, a professor at the largely Puritan Gresham College, initiated those early meetings of the "invisibles." Chief architect and secretary of the Royal Society after the Restoration was John Wilkins, whose religious inclinations later led him to become a bishop and to prepare arguments in defense of Scripture.  John Willis also helped inaugurate the Society. Considered one of the greatest physicians of his generation, he was so strong in his attachment to the Church of England that he was cold-shouldered at the royal court which inclined to Romanism. Among his many charities, he funded a clergyman to conduct worship services at hours when average working men could attend.

Likewise, Robert Boyle was also a devout believer.  He not only engaged in a series of apologetics projects, he endowed a lecture series to defend Christianity, assisted persecuted Welsh clergymen, and subsidized Scripture translation. An innovative chemist, he developed Boyle's Law of Gases and wrote a book which debunked the pseudo-sciences of alchemy. He is often called the Father of Modern Chemistry.  Perhaps the most accomplished man of his day, Christopher Wren was also a founder of the Society. Best known for rebuilding St. Paul's Cathedral, he was an anatomist who prepared the drawings for Willis' Cerebri Anatome, a geometer (Newton classed him among the best), a physicist Pioneering a number vital impact studies), a meteorologist, and a surveyor. He attempted some of the first blood transfusions and made microscopic studies of insects.

Since each of these founders were sincere Christians, it is not surprising that the motto adopted by the new organization was, "Nothing by mere authority."  The history of the Society affords further evidence that modern science, rather than being contrary to Christianity, is in fact its natural fruit.