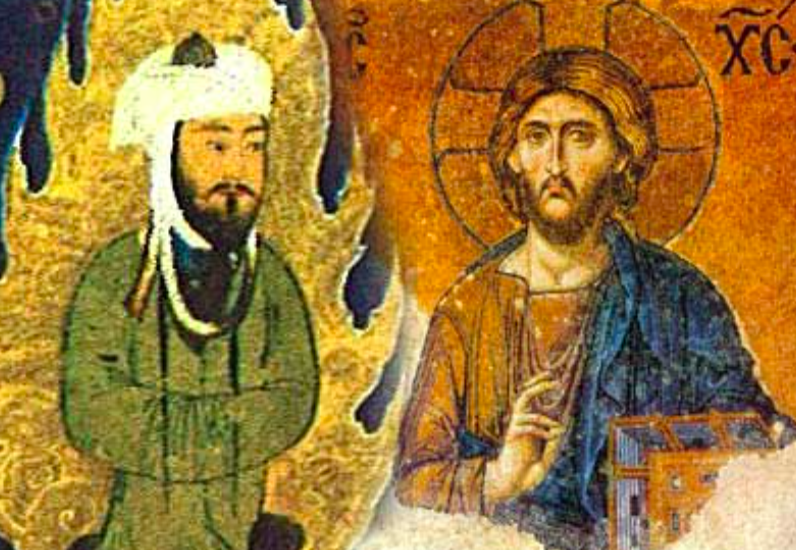 "Wherever you find the infidels, kill them, for whoever kills them shall have reward on the Day of Resurrection. Know that paradise is under the shade of the swords." Muhammad of Mecca

"But I say unto you, Love your enemies, bless them that curse you, do good to them that hate you, and pray for them which despitefully use you, and persecute you." Jesus of Nazareth
Posted by gileskirk at 8:51:00 AM

Thanks George, I posted a link from my blog.

What would the most ardent skeptics or critics say about these two quotes? What would a Muslim say? Is it fair to compare these two statements side by side, or is there more to it?

I think it is entirely fair--the quotes characterize well the core teaching of Muhammad on the one hand and Christ on the other. As for what might a Muslim say, that would entirely depend on whether he or she were a Sunni, a Shia, a Wahhabi, a Salafi, or a Sufi--as well as whether or not he or she were actually familiar with the Koran (like Biblical illiteracy among Christians, Koranic illiteracy among Muslims is rampant).

That helps. I have Muslim friends and co-workers in Malaysia, and so am interested in their particular flavor which is Shafi'i Sunni.

Here is what Wikipedia says about the topic of your post:

"Shafi'i school was the first to justify, as Islamic law, that the proper cause to wage war, jihad, on unbelievers, was their disbelief (kufr).[45][46] War must be waged, they stated, not merely when the unbelievers attacked or actively started a conflict with Muslims, but the unbelievers must be attacked "wherever Muslims may find them" because they are unbelievers. However, Shafi'i scholars clarified that not every Muslim is obligated to fight.[45] This rationalization of war against unbelievers was influential on other schools. For example, the 11th century Islamic scholar Sarakhsi of Hanafi school adopted this Shafi'i doctrine, in his Kitab al-Mabsut, and ruled that Muslims must fight the unbelievers as "a duty enjoined permanently until the end of time".[45] However, this historical interpretation and justification for jihad and unprovoked war from Quran and Hadiths, has been challenged by some modern Islamic scholars."

This debate amazes me. That as a matter of adherence to a faith some form of physical war must be waged against all that disagree. If the argument must result in violence against someone who peacefully disagrees and wishes you no physical harm, then it has been lost already. I really find Islam an ideology of discouragement: their is no Father of love; nor Son of Reconciliation ; nor Spirit of Righteousness. but an obsession by a god that neither cares for you in this life, nor the life to come. I reject it at its core, and find no solace for those who would propagate it among civilized people.

Muslims have one hope , as all men do, Christ and Him crucified.