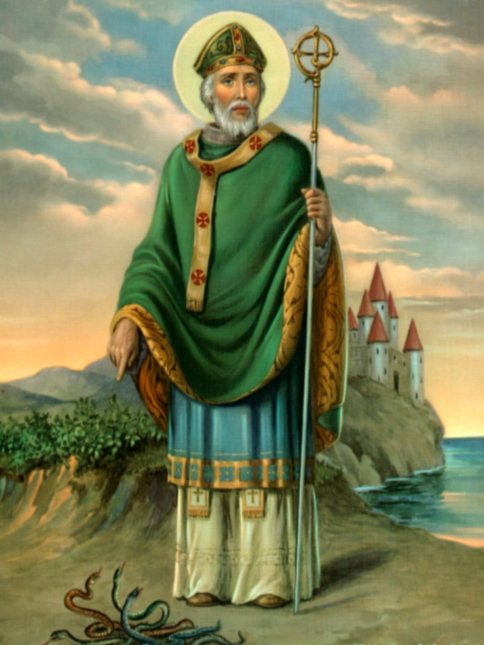 Several years ago, I wrote this little piece for Ligonier Ministry's very fine Table Talk magazine. Here it is again on this St. Patrick's Day:

Patrick of Ireland was a younger contemporary of Augustine of Hippo and Martin of Tours—the fifth century heroes of the faith who laid the foundations for the great civilization of Christendom. He was apparently born into a patrician Roman family in one of the little Christian towns near present day Glasgow—either Bonavern or Belhaven. Although his pious parents, Calphurnius and Conchessa, nurtured him in the Christian faith, he later confessed that he much preferred the passing pleasures of sin. One day while playing by the sea as a teen, marauding pirates captured Patrick and sold him into slavery to a petty Celtic tribal king, named Milchu. During the next six years of captivity he suffered great adversity, hunger, nakedness, loneliness, and sorrow while tending his master’s flocks in the valley of the Braid and on the slopes of the Slemish.

It was amidst such dire straits that Patrick began to remember the Word of God his mother had taught him. Regretting his past life of selfish pleasure-seeking, he turned to Christ as his Savior. Of his conversion he later wrote, “I was sixteen years old and knew not the true God and was carried away captive; but in that strange land the Lord opened my unbelieving eyes, and although late I called my sins to mind, and was converted with my whole heart to the Lord my God, who regarded my low estate, had pity on my youth and ignorance, and consoled me as a father consoles his children. Every day I used to look after sheep and I used to pray often during the day, the love of God and a holy fear of Him increased more and more in me. My faith began to grow and my spirit was ardently stirred. Often, I would pray as many as a hundred times in a single day—and nearly as many at night. Even when I was staying out in the woods or on the mountain, I would rise before dawn for prayer, in snow and frost and rain. I felt no ill effect and there was no slackness in me. As I now realize, it was because the Spirit was maturing and preparing me for a work yet to come.”

Though his parents were grieved to see him leave home once again, they reluctantly supported his efforts to gain theological training on the continent. His classical education had been interrupted by his captivity, so he was far behind his peers academically. But what he lacked in knowledge, he made up for in zeal. Before long he had secured a warrant to evangelize his former captors.

Thus, Patrick returned to Ireland. He preached to the pagan tribes in the Irish language he had learned as a slave. His willingness to take the Gospel to the least likely and the least lovely people imaginable was met with extraordinary success. And that success would continue for over the course of nearly half a century of evangelization, church planting, and social reform. He would later write that God’s grace had so blessed his efforts that “many thousands were born again unto God.” Indeed, according to the early-church chronicler W. D. Killen: “There can be no reasonable doubt that Patrick preached the Gospel, that he was a most zealous and efficient evangelist, and that he is entitled to be called the Apostle of Ireland” (Ecclesiastical History of Ireland, London, 1875).

We know that the kingdom of heaven belongs to “those who have been persecuted for the sake of righteousness” (Matt. 5:10) and that great “blessings” and “rewards” eventually await those who have been “insulted,” “slandered,” and “sore vexed” who nevertheless persevere in their high callings (Matt. 5:12–13). We know that often it is in “afflictions, hardships, calamities, beatings, imprisonments, tumults, labors, sleeplessness, and hunger” (2 Cor. 6:4–5) that our real mettle is proven. Nevertheless, we often forget that these things are not simply to be endured. They actually frame our greatest calling. They lay the foundations for our most effective ministries. It is when, like Patrick, we come to love God’s enemies and ours that we are set free for great effectiveness.