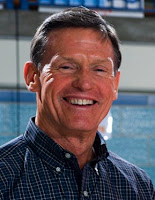 He was perhaps the single greatest coach the sport of swimming has ever known. Richard Quick won Texas state high school titles at Houston Memorial High School six times in his six years there. Then, as assistant coach at SMU, his teams won Southwest Conference Championships two times in four years. In the years after that, he won 13 NCAA championships at Auburn, Texas, and Stanford--at one point, winning six straight national titles. His most recent championship came just this past year at Auburn. He was the head coach of the United States team at the 1988, 1996, and 2000 Olympic Games and also served as an assistant at the 1984, 1992, and 2004 Olympics.

In the summer of 1971, I had the privilege of swimming for and learning from this consummate teacher, mentor, and coach--for the Dr. Pepper AAU Team in Dallas. His unbridled enthusiasm and boundless energy were infectious. It was Coach Quick who convinced me that I could probably do nothing better than to teach and coach for the rest of my life.

This past December, Coach Quick was diagnosed with inoperable brain cancer. Last night, he went to sleep in Austin and woke up in Heaven. He was just 66. He will be missed by all of us who knew him, were changed by him, and loved him.
Posted by gileskirk at 10:06:00 AM

Coach Quick was a good man. I met him when I was swimming in college. (I did not swim for him.) In a very brief time he shared some words with me that not only shaped my stroke, they have helped to shape my life.