A Most Zealous and Efficient Evangelist 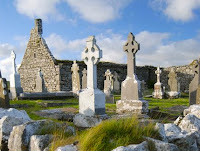 According to tradition, on this day in the year 432, a young British monk—formerly held captive as a slave by the very people he now sought to serve—arrived in Ireland to begin his ministry.

Patrick was said to have been born at one of the little Christian towns near present day Glasglow—either of Bonavern or Belhaven. Although his mother taught him the Christian faith, he preferred the passing pleasures of sin. One day while playing by the sea, Irish pirates captured Patrick and sold him into slavery on a farm in Ireland. Alone in the fields, caring for sheep, Patrick began to remember the Word of God his mother had taught him. Regretting his past life of selfish pleasure-seeking, he turned to Christ as his Savior.

Writing of his conversion, Patrick later wrote, “I was sixteen years old and knew not the true God and was carried away captive; but in that strange land the Lord opened my unbelieving eyes, and although late I called my sins to mind, and was converted with my whole heart to the Lord my God, who regarded my low estate, had pity on my youth and ignorance, and consoled me as a father consoles his children. Every day I used to look after sheep and I used to pray often during the day, the love of God and fear of him increased more and more in me and my faith began to grow and my spirit stirred up, so that in one day I would pray as many as a hundred times and nearly as many at night. Even when I was staying out in the woods or on the mountain, I used to rise before dawn for prayer, in snow and frost and rain, and I felt no ill effect and there was no slackness in me. As I now realize, it was because the Spirit was glowing in me.”

Eventually rescued through a remarkable turn of events, Patrick returned to his family in Britain.  But his heart increasingly longed to return to his Irish captors and share the Gospel of Jesus Christ with them.  He sought theological training on the continent and gained a warrant to evangelize his former captors in Ireland.

When he finally did return, Patrick preached to the pagan tribes in the Irish language he had learned as a slave. Many accepted Christ, and soon heathen songs were replaced with hymns praising Jesus Christ as Lord. Patrick once wrote that God's grace had so blessed his efforts that thousands were "born again to God" through his ministry. Killen, a prominent historian of Ireland wrote, "There can be no reasonable doubt that Patrick preached the Gospel, that he was a most zealous and efficient evangelist, and that he is entitled to be called the Apostle of Ireland."

Patrick ministered to the Irish more than 50 years until he died in 493. Tradition asserts that he reached and baptized in excess of a hundred thousand people.
Posted by gileskirk at 12:30:00 AM