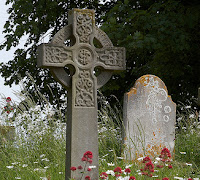 Numbered among the Apostles, the brother of Simon Peter eventually became the revered patron of both Greece and Scotland where his feast day, November 30, remains a kind of national holiday.


Andrew (c. 10-60) may well have been, as tradition asserts, the founder of the church at the site of Constantinople, but he was most assuredly the great reconciler, as Scripture asserts.  As a result, his memory is celebrated by a day of forgiveness.  Services of reconciliation are often followed by a great feast of roasted or smoked beef, the telling of heroic tales, the reciting epic poetry, and the singing of great ballads.  King David of Scotland, son of Malcolm Canmore and Queen. Margaret, codified the day a national holiday in 1125—and so it has been ever since.
Posted by gileskirk at 12:30:00 AM

THIS IS SO GREAT!

We thank the Lord for the cultural richness which He has allowed and enabled you to impart to so many.