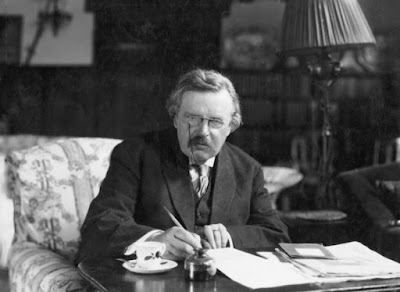 Gilbert Keith Chesterton was surely among the brightest minds of the twentieth century—a prolific journalist, best-selling novelist, insightful poet, popular debater, astute literary critic, grassroots reformer, and profound humorist.  Recognized by friend and foe alike as one of the most perspicacious, epigrammatic, and jocose prose stylists in the entire literary canon, he is today the most quoted writer in the English language besides William Shakespeare.

His remarkable output of books—more than a hundred published in his lifetime and half again that many afterward—covered an astonishing array of subjects from economics, art, history, biography, and social criticism to poetry, detective stories, philosophy, travel, and religion.  His most amazing feat was not merely his vast output or wide range but the consistency and clarity of his thought, his uncanny ability to tie everything together.  In the heart of nearly every paragraph he wrote was a jaw-dropping aphorism or a mind-boggling paradox that left readers shaking their heads in bemusement and wonder.

But Chesterton was not only a prodigious creator of characters; he was also a prodigious character in his own right.  At over six feet and three hundred pounds his romantically rumpled appearance—often enhanced with the flourish of a cape and a swordstick—made him appear as nearly enigmatic, anachronistic, and convivial as he actually was.  Perhaps that was a part of the reason why he was one of the most beloved men of his time—even his ideological opponents regarded him with great affection.  His humility, his wonder at existence, his graciousness and his sheer sense of joy set him apart not only from most of the artists and celebrities during the first half of the twentieth century, but from most anyone and everyone.

He was amazingly prescient—predicting such things as the mindless faddism of pop culture, the rampant materialism permeating society, the moral relativism subsuming age-old ethical standards, disdain of religion, the unfettered censorship by the press (as opposed to censorship of the press), the grotesque uglification of the arts, and the rise of the twin evils of monolithic business and messianic government.  It seems that his words ring truer today than when they were first written nearly a century ago.

But perhaps the most remarkable thing about Chesterton was not his prodigious literary output, his enormous popularity, or his cultural sagacity.  Instead, it was his enormous capacity to love—to love people, to love the world around him, and to love life.  His all-encompassing love was especially evident at Christmastime.

Maisie Ward, Chesterton’s authoritative biographer and friend asserted, “Some men, it may be, are best moved to reform by hate, but Chesterton was best moved by love and nowhere does that love shine more clearly than in all he wrote about Christmas.”  Indeed, he wrote a great deal about Christmas throughout his life—and as a result his love shines abroad even now, nearly three-quarters of a century after his death.

Dr. Grant,
Are GKC's Christmas writings collected in a volume?
Thanks,
E&J

Yes. There is a wonderful little collection of pieces called "The Spirit of Christmas." There is also a newer book that collects quotes, poems, and snippets called "Advent and Christmas Wisdom From G. K. Chesterton." Check out the American Chesterton Society website for all the current Chesterton books currently in print.

Thanks, Dr. Grant.
We'll add one of those to next year's collection.