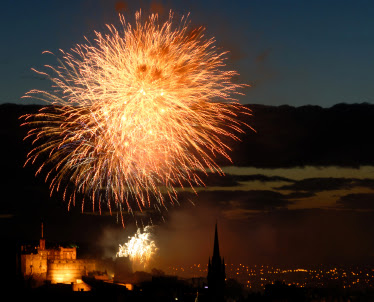 The celebration of the New Year did not occur on the first day of January until after the introduction of the Gregorian calendar in 1582—and even then only in France, the northern Italian city states, Portugal, and in the Spanish nations of Castile and Aragon.  The new calendar was not accepted until 1600 in Scotland and 1752 in England and America.

From the earliest days of the Roman imperial calendar the New Year was celebrated on March 25—which is why September, October, November, and December are derived from the Latin words septem (seven), octo (eight), novem (nine), and decem (ten).

Throughout Christendom, January 1 was instead celebrated as a day of renewal midway through the Yuletide season—it was thus a day for vows, vision, and vocation.  It was on this day that guild members took their annual pledge, that husbands and wives renewed their marriage promises, and that young believers reasserted their resolution to walk in the grace of the Lord’s great Epiphany.

In Edinburgh beginning in the seventeenth century, revelers would gather at the Tron Church to watch the great clock tower mark the last hours of Christmastide—which was the inspiration behind the much more recent Times Square ceremony in New York.  In Edinburgh, of course, the purpose was not merely to have a grand excuse for a public party, but was a way for the whole covenant community to celebrate the grace of Epiphany newness.
Posted by gileskirk at 8:26:00 PM

What? No comments? Why the absurdity of neglect.

2012 will be an alcoholess year for three in my family, and with this new wrinkle on pre-Gregorian new years, I'll submit we hold out until March '13.

Always laud George Grant's work. Thanks for this.