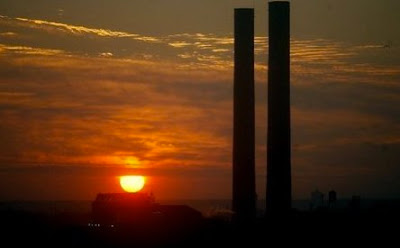 First settled on this day in 1796, Cleveland remained a sleepy little village at the mouth of the Cuyahoga River on the shores of Lake Erie for nearly two decades.  But the nearby exploits of naval commander Oliver Perry during the War of 1812 highlighted its strategic position.  The completion of the Ohio and Erie Canal in 1832 and the arrival of the railroad in 1851 cemented its importance—accessible to both the coal and oil fields of Pennsylvania and the iron ore mines of Minnesota.

Following the War between the States, it became a center of political and economic power—giving the nation five presidents during the next fifty years including Rutherford B. Hayes, James Garfield, William McKinley, William H. Taft, and Warren G. Harding as well as several of the greatest industrial monopolists including Marcus A. Hannah and John D. Rockefeller.

By the end of the twentieth century, Cleveland had very nearly died.  Once the fifth largest city in the nation, today it does not even rank in the top twenty.  Though once a hub for transportation, a model of industrialization, and a progressive leader in social and cultural reform, by the second half of the twentieth century, it had begun a precipitous decline.  In some ways it became emblematic of what became known as America’s "Rust Belt."  It’s once busy factories had become decrepit, its vibrant communities had become depressed, its wonderful location had become spoiled by polluted air and water, and its massive modern infrastructure had become obsolescent.  It became an embarrassing blight.  The proud metropolis was derisively referred to by critics as the "Mistake on the Lake."  Population declined by nearly half.

Nevertheless, its rich heritage—it has had been estimated that there are some eighty different ethnic groups in the city speaking more than sixty different languages, representing nearly every race, tongue, and tribe on the planet—and progressive leadership have brought some serious steps toward renewal to the city.  By the time of its bicentennial, the city was once again hoping to reassert its strategic significance.
Posted by gileskirk at 8:44:00 AM