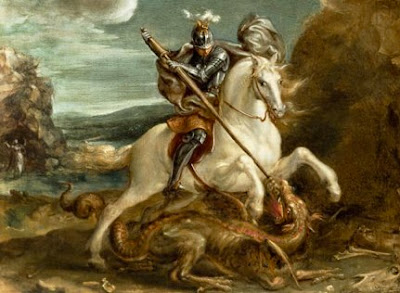 The Patron Saint of England, Lybia, Lebanon, and Greece, George was a Syrian Christian soldier who quickly rose through the ranks of the Roman the army into the Imperial Guard by virtue of his valor and vision.  However, he had the temerity to confront the Emperor Dioclesian concerning his harsh, unjust, and bloodthirsty decrees.  For his candor and courage, George was immediately imprisoned and was soon after beheaded.

The legend of George is centered around his slaying of the dragon that had demanded the children of the town of Sylene in Libya.  George wounded the dragon and led him back into the town where he proclaimed that he would kill the dragon if the people of the city would hear and heed the Gospel, convert to Christianity, and be baptized.  Starting with the king, some 15,000 citizens were thereafter baptized.
Posted by gileskirk at 5:41:00 PM